Teaching with
Compassion and Dedication

REVIEWED AND ENDORSED BY: 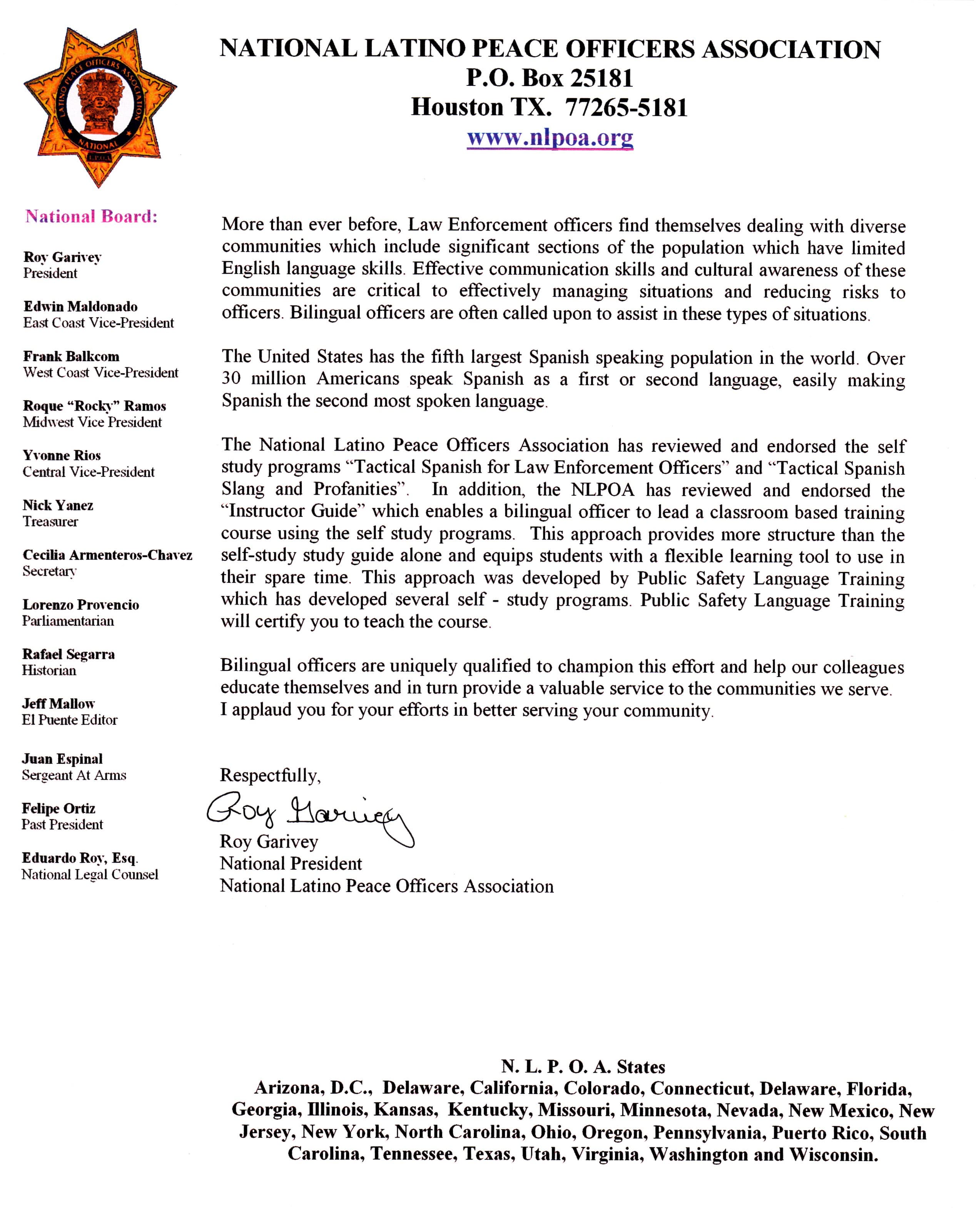 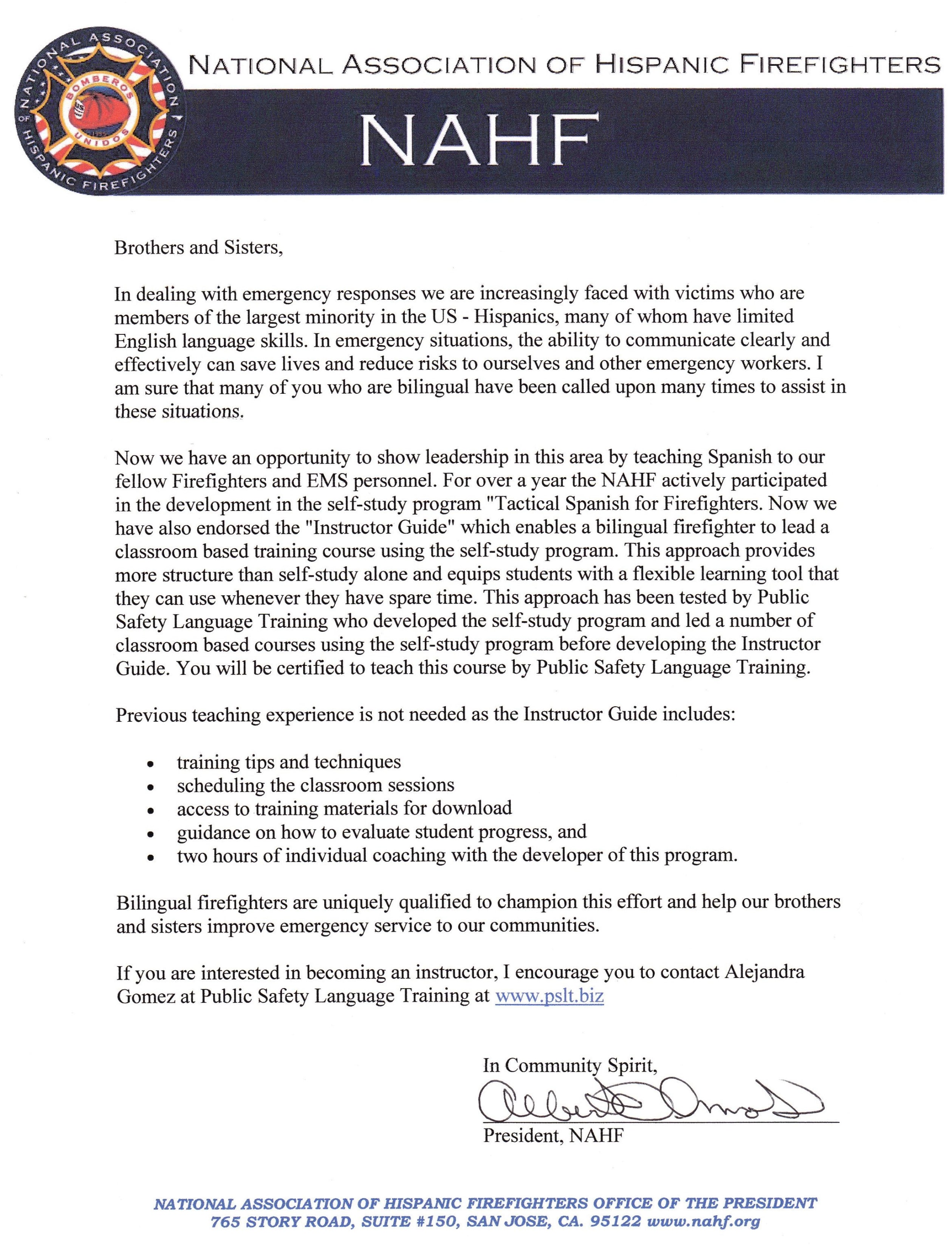 Train the Trainer enables a bilingual Spanish speaker to teach our Classroom Learning. PSLT will certify you to teach this course and assist you to tailor the course to your students’ needs.

To be able to ask basic questions during a routine traffic stop.

Start with one word : luz – make sure you show your “Traffic light”
Then two words: for example: luz roja, vuelta illegal.

Using your hands to communicate, present commands and verbs in Formal Spanish

In this section you will learn some basic commands and questions for a Routine Traffic Stop and asking questions to adults and children with the verbs: to speak, to understand, to have and to know.

Let’s start with the commands.
Notice the different ending between Formal and Informal Commands.
Listen and Repeat the Spanish Words.

If you need to request a phone number, take a short cut and simply use the word “teléfono”.

Add this verb to the previous question

And the informal way when you speak with children, teenagers or friends :

And the informal Spanish for

The answer to this question can be:

So far you have learned 4 verbs: “speak”, “understand”, “have” and “know”.
To make a statement or to ask a question in Formal or Informal Spanish, you can use the same words, but to ask a question, all you do is raise the tone of your voice at the end of the phrase.

By raising the tone of your voice at the end, the verbs become a question, either for an adult or for a young person. Listen and Repeat!

In many countries in LatinAmerica armed forces and police are not regarded with respect but with fear and suspicion, because of their corrupt and criminal behaviour. Low salaries, inadequate training and a long tradition of bribes (mordidas – literally bites) converts the average traffic cop into an habitual lawbreaker.

There are dozens of  police units in Mexico including: Riot Police, Customs Police, Highway Police, Federal Judicial Police, State Judicial Police, etc. The last two groups are also called : federales and judiciales, which are the most feared kind of police. As Mexicans say: If you see a cop coming on your left and a thief coming on your right, it’s better to go with the latter”.

You are going to conduct a basic traffic stop.The person is a male adult. It’s 10:00 in the evening. Please tell him:

Listen to the phrases at normal speed.

Complete the missing parts of this dialogue using Formal Spanish

Complete the missing parts of this dialogue using Informal Spanish

To make it simple, tell your students that you’ll focus this time in the Formal Spanish. Have your students repeat the phrases or questions using the 3 titles:Señor, Señora and Señorita.
Then present the Informal Spanish and encourage the students to use it with each other and make sure they respond with complete phrases: Me duele, me caí, me lastimé, Yo tomo, etc.

Describing Medical problems: Mention to your students that is common for people to express pain in these 2 ways: Me duele …../ Tengo dolor en ….

Explain the difference in use between: SER and ESTAR (permanent & temporary). Remind them that the Formal Spanish phrases and questions can also be used to talk about a third person: Le duele a él? Le duele a ella …? Cómo se lastimó el niño?

Listen and repeat the Spanish Words

Let’s use the previous words in the following questions:

The most common way that a Spanish speaking person will use to describe pain is with the phrase: Me duele… followed by a body part: for example: Me duele el pecho (my chest hurts); Me duelen los pies (my feet hurt).

Other ways to express pain are the following:

Others words that people use instead of “estómago” are the following: Panza and Barriga; both mean belly. If you are talking to a child, you can use the diminutive: “pancita” or “barriguita”. “Panzón”  or “Barrigón” is applied to a male that has a big belly. “Panzona” literally means that a female has a big belly but can it can also be used as a vulgar way to say ‘pregnant’, for example: “Maria está panzona” (María is pregnant) or “María salió panzona” (María got pregnant).

This is the end of Unit 8

Change the phrases or questions into Informal Spanish

American Me
Blood In, Blood Out
My family
La Bamba

Unit 19 – Rules for Inmates and Visitors

In this unit, you will learn some basic rules for Inmates and Visitors.
Listen and repeat:

I am impressed with your Spanish!         Estoy impresionada con su Español!

Please complete the exercises for this unit.

Exercise 19:  Rules for Inmates and Visitors

There are two versions of each of the following rules for inmates. One is unlikely to be used in any correctional facility. Circle the unlikely rule and write the correct rule.

If you're not satisfied, return the course within 30 days for a full refund.